Have a wonderful experience this year!

Dear Hellene, we received the diplomas and the great gifts from you - they are wonderful and we are so proud of them!
Thank you so much 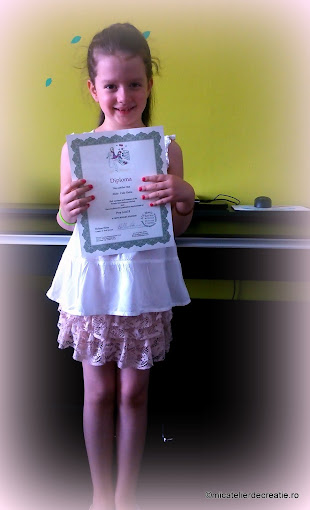 Let me show you what our latest music/piano lessons sounded like.
I would very much like to recommend you all a great new Usborne release (August 2014), Classical Music Sticker Book, which is absolutely wonderful! 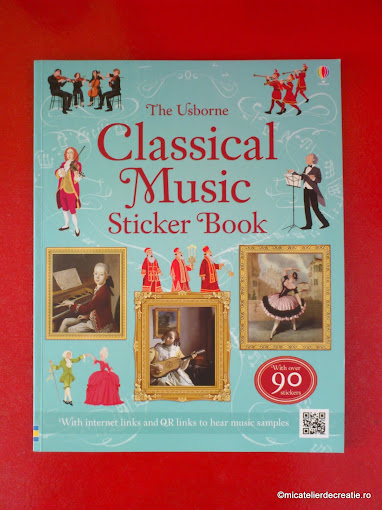 We've been working on it for a while now and we aren't fed up with it, yet.
Written by Anthony Marks and illustrated by Galia Berstein, it is a rather large book (276 x 216mm), of 32 pages of text and other 10 of stickers.
What I love about it is the fact that, while I read Maia interesting and captivating facts about music, she finds and places the "musical" stickers where they belong to.
Further more, the book provides us, on every second page, with QR links (for tablets and Smartphones) and quicklinks (for the computer) - they allow the reader to listen to the musical pieces the information is about! 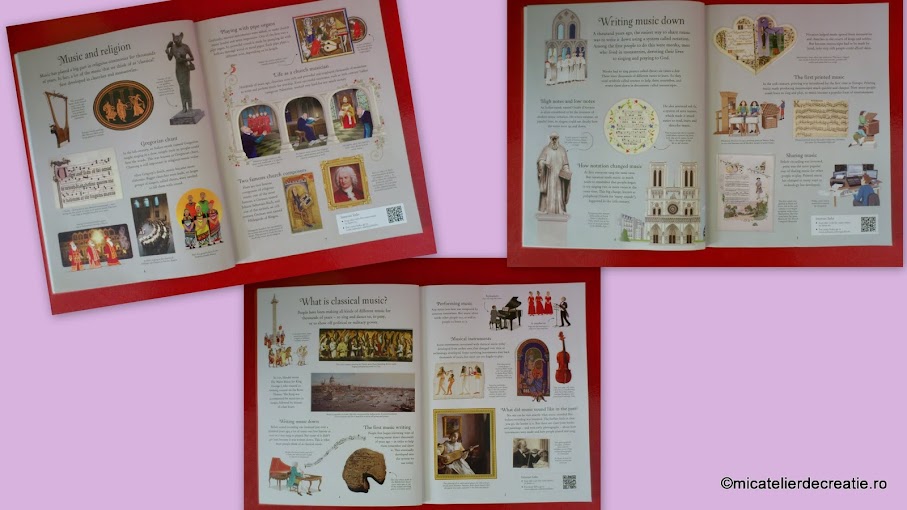 I also love the richness of the topics: What is classical music?, Writing down, Music and religion, Music for entertainment, Operas, Music for ballet, The Orchestra, Concerts, Music and monarchy, Music and painting, Music and nature, Words and music, Music and science, Music and technology, Timeline. 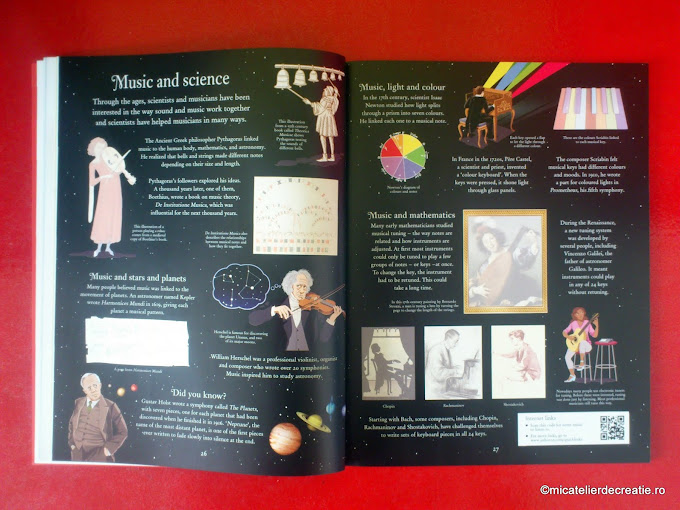 I picked up a few fragments, samples from the books, so that you can all make your own impression:

Before sound recording was invented, just over a hundred years ago, a lot of music was lost forever as soon as it was sung or played. [...]

An Italian monk named Guido d'Arezzo is often considered to be the inventor of modern music notation. He wrote neumes on parallel lines, so singers could see clearly how the notes went up and down. [...]

Music has played a big part in religious ceremonies for thousands of years. In fact, a lot of music that we think of as "classical" first developed in churches and monasteries. [...]
Concerts as we know them today didn't exist before the 18th century. For most people, the only opportunity to hear musicians playing was at dances and fairs, often held near castles and palaces. [...]

The world's first ballet company was set up in 1661 by Louis XIV of France. He himself performed as a dancer, and employed a composer named Lully to direct the royal ballet and opera. [...]

Until the late 18th century, there were hardly any public concert halls - and hardly any concerts. Any concerts that were held took place in churches, palaces and theaters. [...]

King Louis XIV of France was a musician and dancer. His nickname, "the sun king" came from the costume he wore when he danced in a ballet, written by his court composer, Lully, when he was only fourteen years old.

In 1804, when German composer Beethoven had just finished his third symphony, he dedicated ii to Napoleon and wrote his name on the cover, because he admired the French military leader so much.
But when Napoleon declared himself the "Emperor of the French", Beethoven was so angry that he erased his name from the music and renamed the symphony Eroica, meaning "heroic".

The Ancient Greek philosopher Pythagoras linked music to the human body, mathematics, and astronomy. He realized that bells and strings made different notes depending on their size and length. [...]

Many people believed music was linked to the movement of planets. As astronomer named Kepler wrote Harmonices Mundi in 1619, giving each planet a musical pattern.

In the 17th century, scientist Isaac Newton studied how light splits through a prism into seven colours. He linked each one to a musical note.

If this book stood for the theoretical part of our learning, the practical part sump up to sight-reading.
We started with the album Favourite Classics 0 (with R2, then got to L2) and today, Maia finished sight-reading it with both hands (P2) and less than 3 mistakes per the difficult pieces.

For the coming weeks, we intend to go on with this type of exercise, but step towards a next level, Christmas Carrols level 1.0 and 1.1.
This way, I make sure that Maia has enough time to get acquainted with all the Christmas pieces in the library, choose and learn the ones she likes the most.

Dear Hellene, we thank you once again for the scholarship and we promise to make you proud of us!

An Italian monk named Guido d'Arezzo is often considered to be the inventor of modern music notation. He wrote neumes on parallel lines, so singers could see clearly how the notes went up and down. [...]


Did you see this video about that?

Back to the Mozart
The following user(s) said Thank You: ssroyan, ZNatalia

Yes, we've seen this great video before, and we are watching it again - thank you very much.

Have a great day!

Congratulations with her Diploma & gifts! Maia looks so happy!
Many thanks for new book recommendations!
The following user(s) said Thank You: camelia1902

Thank you so much for the nice words!!!

Have a wonderful day.

She seems to already master the right hand (with the correct finger position):

And, yes, pretend play is still the best way to learn (Fufu, her doll needs to know the keys, too):

This morning I could see the difference between her sight-reading at the beginning of the week and the end of it.
She sees this piece for the very first time, and she hardly makes any mistake:

Thank you so much, Hellene, for the advice!