September 1 is a deadline for the Progress Diaries

Less More
21 Nov 2014 21:03 #16654 by CVMomma
Maria, age 4, Prep level C was created by CVMomma
Hello! I am finally back on-line! I have missed several months of posting to our progress diary without the computer.

Maria still practiced faithfully everyday as the computer for the piano keyboard is not connected to the internet anyway. We have not been able to look at the lesson plans, so we just did the best that I could remember. She played at least one game each time and then worked on the songs that she picked out in August. For most of the month of August, she just scrolled through the different songs and played whatever she felt like doing. By the end of August, she had picked out 3 songs to practice for the winter recital. She chose: O Sole Mio, Laughing Song, and Symphony #5.

Each day, I had her write her score on a piece of paper. Since I have several months worth of scores to type out, I just took a picture of the paper. I hope it shows up well enough, it would take a very looooooong time to do it by hand!

We removed the stickers during August, so I had her practice Guess Key Game the most to help her learn the placement of the keys. She now knows the placement of all of the notes without much hesitation! Her favorite game was Note Duration, so she also played that often. There is another paper with more game scores, but I didn't get a picture of it yet. 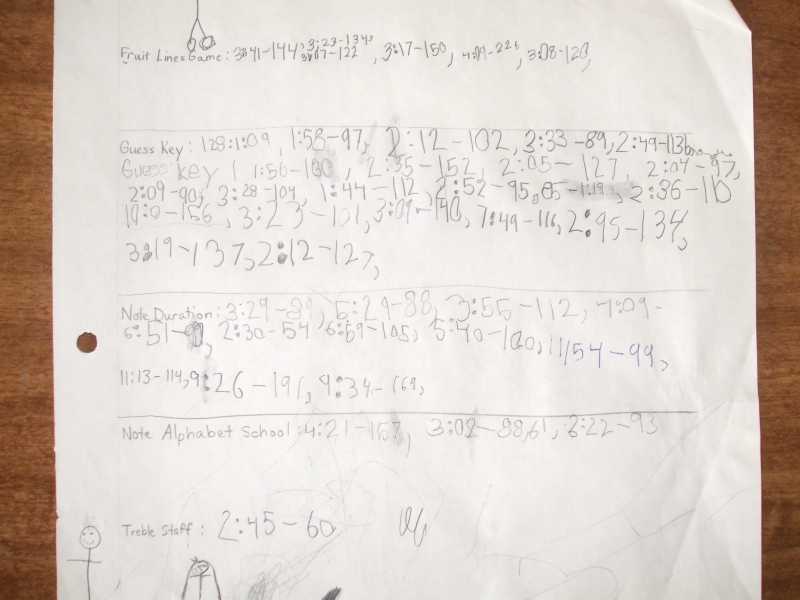 Symphony #5 was her favorite of her choices. I just discovered today, that she can almost play it from memory even though we have never worked on memorizing it!!! 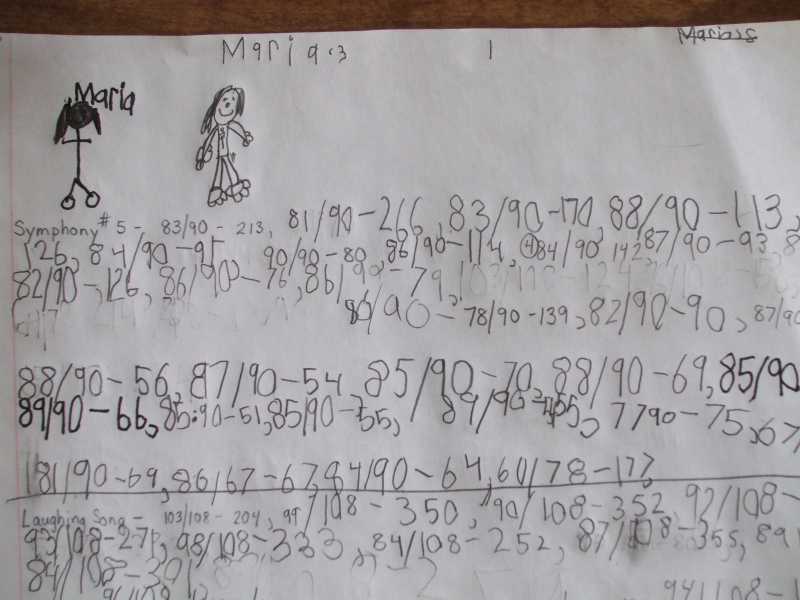 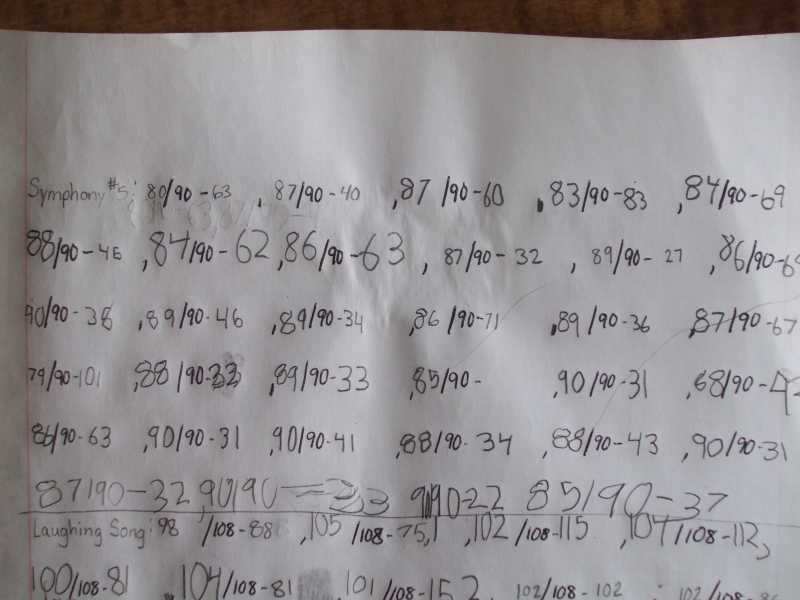 Laughing Song was probably her hardest song. Some days she wanted to quit, but she is learning that good hard work brings happy results! She is so proud of herself when she gets 108/108! I am proud too! 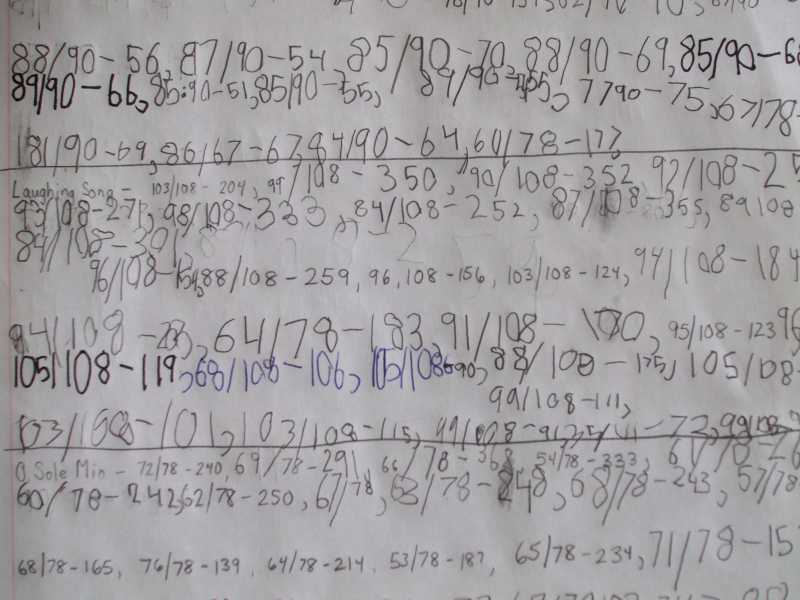 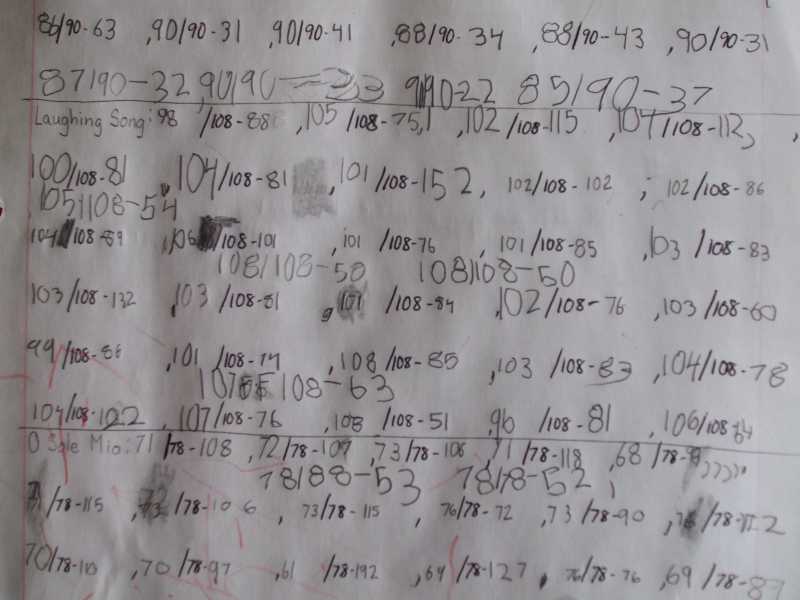 O Sole Mio was not her favorite and it took the longest to get a perfect score, which is her goal everyday! Some days she wanted to not write down her score until she did better. She didn't want Hellene to see her bad score.

I reminded her that Hellene would be proud that she kept practicing even when she got a "bad" score. She doesn't mind the "bad" scores too much anymore. She knows it is how she learns. 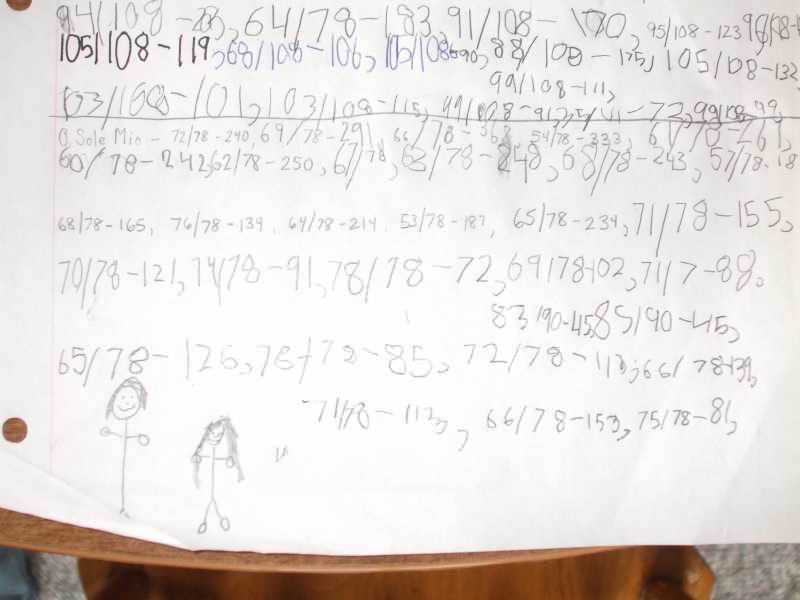 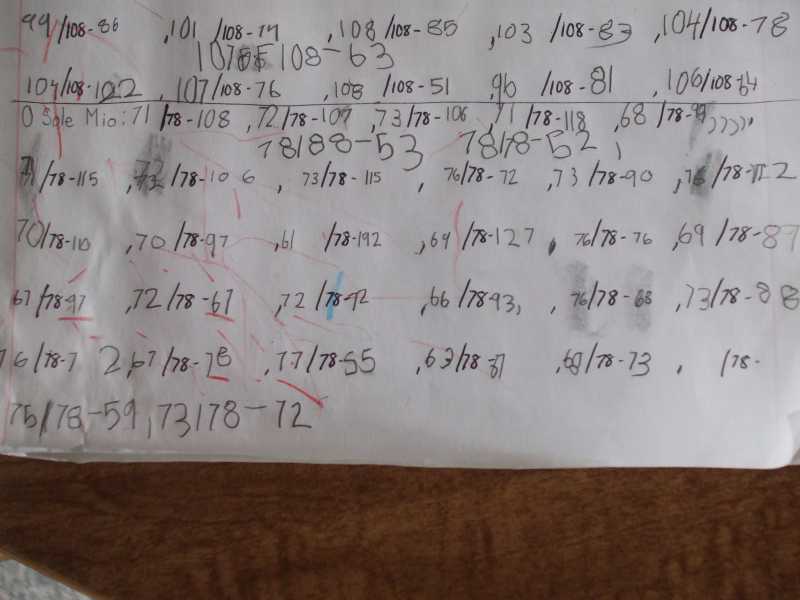 We have not been working on the exercises, mainly because I forgot!

Now that I can look at the lesson plans, we will start working on them again. She still remembers "White Cat, Black Cat" and Hanon.

I will try to get videos posted soon of her practicing!

At this time, I have not been practicing myself. I am teaching 2 days a week and have a very busy baby! I occasionally sit down and play something, but not regularly.

I am very impressed with your daughter self-conduction in learning music and piano! It is priceless indeed! In fact, it will be the great skill to have i her academic future. I am very proud of Maria.

I can'r wait to watch your videos!
Back to the Mozart
The following user(s) said Thank You: CVMomma


And here are 3 songs that she just picked at random and played for the first time.

Angels We Have Heard on High

By the way, even after practicing a lot, she really struggles with timing. It is something that I have a hard time with too. The computer that is hooked to the piano does not have internet, so it is hard to play with the teaching videos. If my internet is working well, I can play it on the ipad next to the piano. But often, the teaching video goes so much faster than what she can play, and it frustrates her. Is there any way to slow down the S mode? We almost always push S before she starts her practice so she can listen to what is supposed to sound like. I would have her play along with that, but it goes too fast too.
The following user(s) said Thank You: Ines, Аким

Less More
04 Feb 2015 20:52 - 04 Feb 2015 20:56 #17938 by CVMomma
Replied by CVMomma on topic Maria, age 4, Prep level C
Maria took almost the whole month of December and part of the month of January off because we were not at home. When we came back, she really wanted to participate in the recital, so she spent a few days practicing songs for that and then putting on her "performance". After I took the videos of that, she also played it for her Grandparents. Here are some pictures I took of her practice since the recital.

Guess Key practice, she was pleased to get 3 baskets of fruit!!! 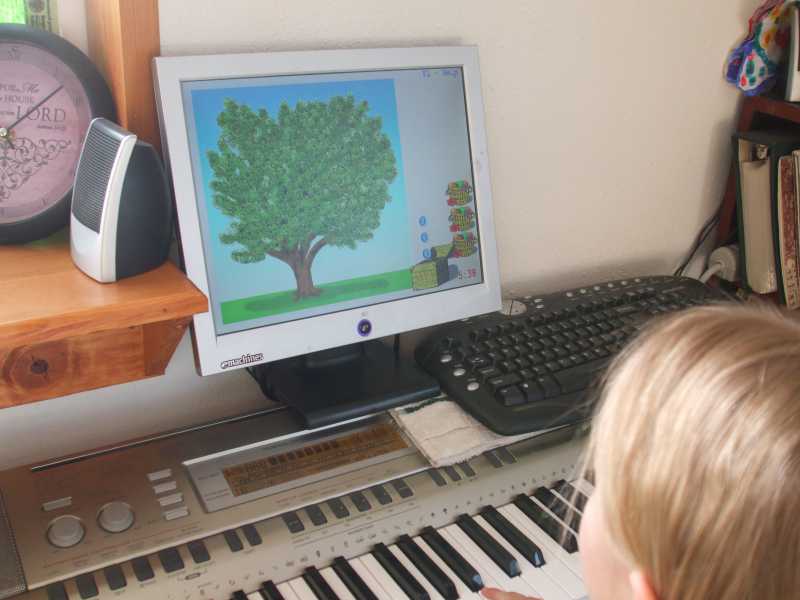 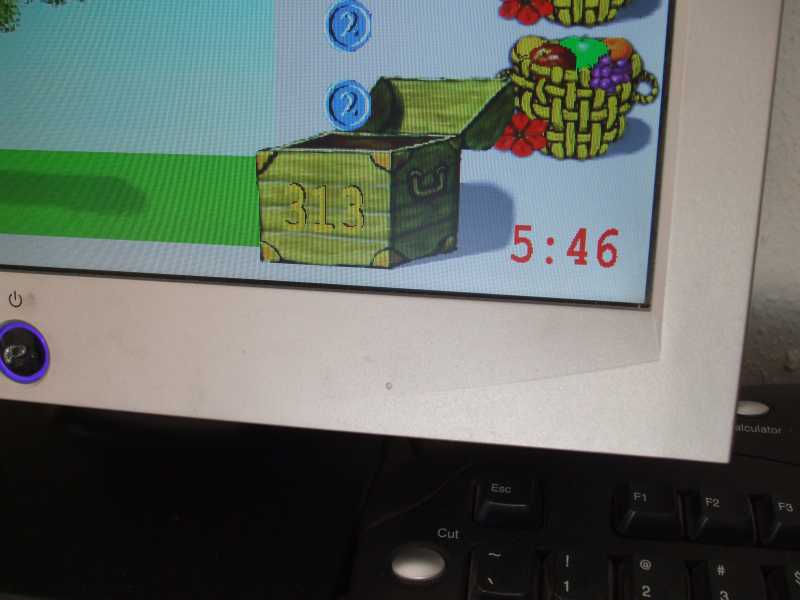 She likes to do her own writing! Very Independent little girl!!! 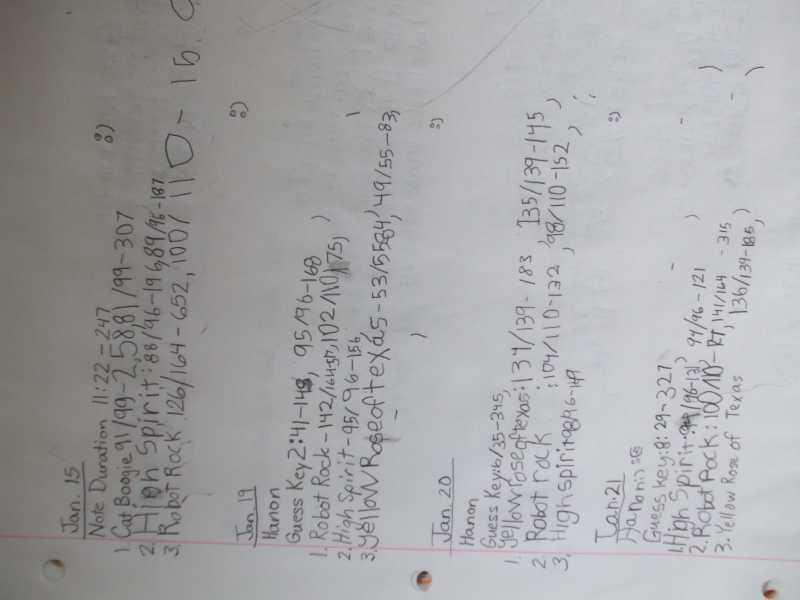 Sorry it turned out sideways! 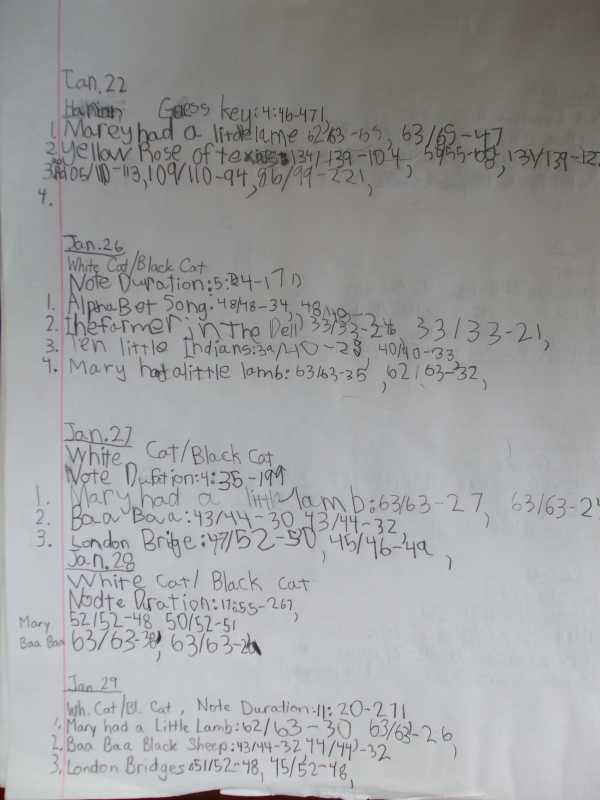 I am wondering what kind of exercises to do to strengthen her fingers. She tries to play with her wrists up, but I think she lacks the finger strength to do it correctly.
The following user(s) said Thank You: Аким